From the moment I opted to upgrade/format my Acer E1-572G to Windows 10 (since its initial release encouraging those in Win8.1 to avail the free upgrade), it was plagued with driver incompatibilities particularly the secondary AMD/ATI Radeon HD8750M graphics chipset. Initially I found a workaround wherein I left it stuck at the Feb2017 Crimson 17 (version 21.1 driver) release at the time of the 17XX update and kind of left it there throughout 1803 and 1809 release. But when the 1903 update finally popped up, the problem resurfaced and this time neither that old driver or the current Oct 2019 release didn't work and kept on freezing the OS even prior to logging-in. Just doing a fresh install will land you on the same problem.

I relied once again to the old ye faithful Google search and found an interesting post in the AMD community forum describing the same issue. The correct solution came from the user handle "lmarcelus" which described modifying the extracted inf driver file and disable the UIps. I've included the screenshot of his solution for archive sake in case AMD wants to clean house. 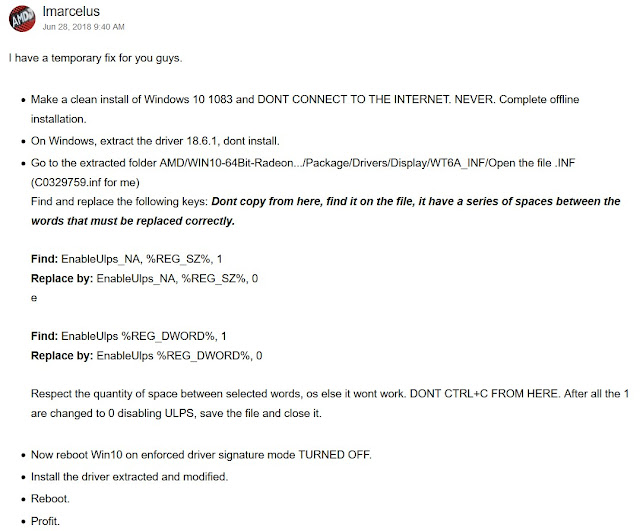 I'm not entirely sure what the UIps is for or how it may affect graphics-intensive apps/gaming but it was worth a shot and actually worked! On my experience, I did a fresh install using the Windows10 1903 update and yes I finished the installation wizard process while staying offline. You will need the drivers ready and at-hand (USB perhaps?) if you don't have a spare PC/device that you can use to download it. Another item you may need to read-up is how to turn off the enforcement of driver signature (hint: through the same way how you boot to safe mode but this time select option 7 or was it 8).

If by chance reformatting is not in your itinerary, best thing I can suggest is to try and boot to safe mode (with no networking) and use the AMD cleanup utility. The tool will remove/disable all the AMD/ATI drivers installed, which will leave you a clean un-initialized video card device listed on your device manager. Only after doing that clean you can then perform the said modifications.

Scrolling further down that same forum page there's another comment by "ax7" (Github user "qbsa") who made a service/script that you can install to your machine to automatically modify any new/updated drivers being installed similar to the solution initially provided. The exact instructions and files are in his GitHub page. I suggest you put the install files (the exe and cmd file) in its own folder somewhere hidden or safe from normal browsing view before attempting to install because those files will need to stay there in order for the script service to remain working.

I hope this helps anyone out there who just wants to bring their laptop with that infernal ATI HD8600/8700M GPU back to working order. Cheers!