I've recently applied for the PLDT Fibr plan 2899 around April 2016. After almost 4 weeks of follow-ups and service request with the "accommodating" PLDT hotline and dispatcher number, I finally got my subscription installed at our house in Mandaluyong (Barangay Namayan to be exact).

A lot of my friends started asking if it was any good... and I typically start my response of it being expensive. As for the aspect of is the connection any good compared to sticking with existing broadband DSL subscription, that is a bit tricky. Fortunately, somebody gave me an idea to do a "speedtest" of the fiber-based connection going to nodes/servers located outside the Philippines.

Background of the PH internet

Based from the marketing material and advertisements of PLDT, they're saying that you can get speeds up to 50 Mbps (100 Mbps for the first 6 months, but that's just a teaser and will only be "fun while it lasted"). But those speeds can only be achieved if you measure your speed going to servers located on the same PLDT network. What's really important is how fast your internet connection going to outside of the Philippines or even to the other local network competitor (e.g. Globe).

All the content that we usually access are not hosted within the Philippine territory and are typically in Japan, Singapore, Hong Kong and even the US. The latency, which is the "ms" thing you get when you do a ping test, going to servers located elsewhere is the one that matters the most. The lower the latency value the better; anything < 100 ms is sort of "acceptable" for most cases, higher than 200 ms and you're pretty much screwed especially in online gaming.

Without further delay (unlike what PLDT usually does), see below the screenshot of some "speedtests" I conducted. 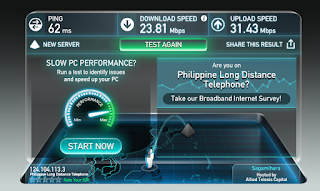 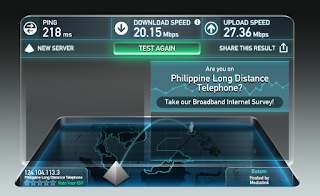 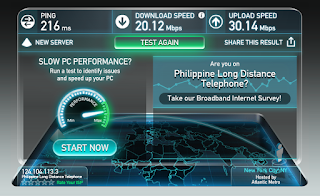 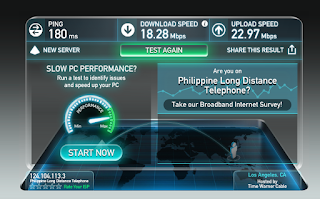 If comparing it with other internet subscriptions and DSL connections, I believe they're not too different if the latency is the one you'd consider. Bandwidth-wise, definitely it will be faster simply because it now uses a fiber optic line versus a copper line for DSL.

If you want my opinion if you should switch... I leave you with this message...

As long as you think you can afford the monthly subscription fee and if it is available within your area, why not. But as early as now, I'm bracing myself and thinking of ways to re-align the utility costs we have for the household because it is simply expensive for "just" internet (PHP 2,899.00 per month isn't really a joke).