Samsung Spica i5700 Galaxy in the flesh 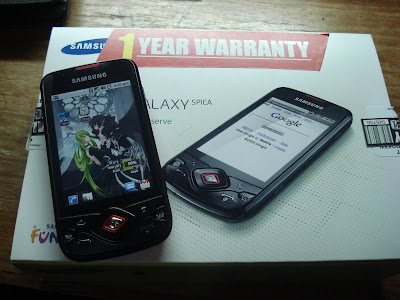 As a somewhat avid fan and user of anything by Google, be it the simple Gmail to the complex power of Google Apps, of course I wanted an Android-powered phone which will fit my budget. This constraint of budget-issues was then answered when Samsung released the Spica i5700 Galaxy during this Q2.

Samsung did a brilliant job of immediately tapping this consumer market of tech-savvy but budget-restricted people with their introduction of the Spica i5700 Galaxy. At first it was a far-cry from my old conventional phone (I came from a SE K810i) which is somewhat weird at first. The Spica ain't that all good looking but rather kept a practical and simple look. Indeed it is all made of plastics and all compared to an iPhone, but hey, you get what you paid for, which is around Php 15,000 or even lower (I got mine on a deferred payment scheme of 12-months 0%-interest, with a total of Php 16,290... yeah it costed me a bit more). 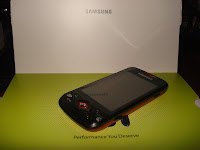 The unit initially entered the market with an Android 1.5 (cupcake) OS, but of course this was a very slow and restricted version until they introduced an official update to the 2.1 (eclair) series. I bought my unit which was already updated into 2.1 (a good call if you ask me) and with an extra red back case. Packed with Samsung's own 800 mHz processor an a pseudo-AMOLED (yep, it is only a TFT screen), it actually looks good and feels good. I installed a Tag-Home app which replaced the defaulted Home-theme developed by Samsung, which I think was a bit sluggish in terms of response, and didn't have a landscape view when tilted on the "Desktop" area. 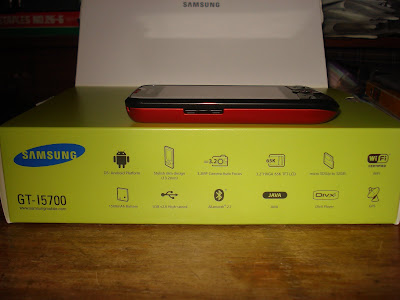 The Spica only has a 200 MB internal storage memory that covers all your caching (mail, browsing, text messages, etc.) and your available space for installing other apps. Of course the hoped-for Android 2.2 (froyo) that supports installing apps into your SD card is in the window, its only the matter of whether Samsung will create an official update to it. Leaving the internal storage space aside, it is actually a jam-packed unit which covers everything that you might and will possibly look for; bluetooth v2.1, wi-fi capable (BG range), in-built GPS, micro-SD slot that supports up to 32 GB, accelerometer for sensing orientation and for other apps, 3.2 mpixel camera, and of course 3G capable since this is targeted as an internet-reliant phone because of all the Google services built-in. 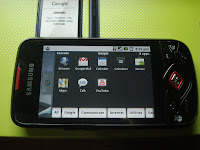 Now onto the Google services I mentioned. The Android OS requires you to have a Google account, which is no biggie. This is initially troublesome for other people, I myself wasn't spared, because of the initial task of migrating from your old phone. It did however proved me wrong of being hard to migrate because all you need is a way to export your contacts to a file that will be accepted by Google Contacts for "import contacts" option, and the power of the Internet. Having my own Google Apps account made things a lot easier because of the immediate integration of my mail, contacts and calendars... if you think of it, it is actually the same for a regular Google account.

The functionality of the Google Latitude, which is already tied with the Maps app in the phone, is something that I suggests to be tried-out and played in this phone, although I admit Philippine support in terms of roadway and traffic are still in need of updating. But just a reminder, if you are hiding from people, better turn this service off or make sure you know whom you granted access to see you on Latitude.

The phone, after a few settings tweaked, will automatically sync all of these when it has an Internet connection, be it a wi-fi connection or 3G. This ain't exactly a user-friendly phone at first glance, and will probably require some patience (for total newbies in anything Google) but of course everyone will get used to it. As for the size and weight, it is relatively light but not exactly a slim phone as people initially think of when comparing with an iTouch or iPhone. 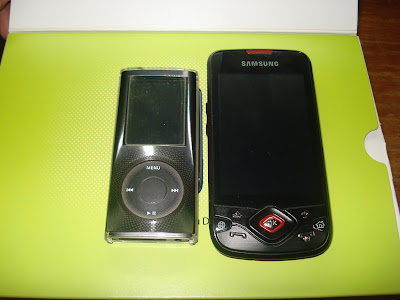 Overall, I think this phone is worth it in terms of the functionality and definitely on its cost. Of course if you want to make sure you get the most-responsive unit around the market, the Spica ain't exactly that one and will definitely costs you a bit more (like it's brother, the i9000 Galaxy). But of course, in a practical perspective, this is a must-buy and it will surely be of good use, giving you a new look on how you use a mobile phone (more like a PDA of sorts) that won't hurt your wallet too much.
Posted by Armand Z at 8:41 PM